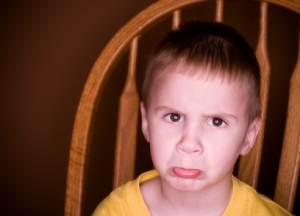 That's a time out for you, young man

By now you’re bound to have heard of the great “Climategate” scandal of late 2009. Hackers broke into the computer archives of the Climatic Research Unit at the University of East Anglia and stole data and email archives dating back 10 years. Then, somehow (who can say?) these files found their way into the hands of climate uber-skeptics. It was discovered that–shock, horror–climate scientists were saying rude and very unscientific things about their most relentless critics. (A good synopsis and discussion, written by someone outside the conflict, is the one by Peter Kelemen at Columbia University.)

Now, to put things in context, you should know something about my two boys, ages 7 and 9. Although they get on fine most of the time, and even like each other, there is some sibling rivalry.

Ewan, the youngest, is a professional little brother. He takes his job very seriously. He needs to mess with his older brother’s stuff, to do everything that his older brother does, and he needs to irritate him whenever he can get away with it. He knows he might get walloped, but he specialized in walking on thin ice.

Angus, the elder, though he enjoys life, is still a little perturbed that his comfortable sinecure as only child was abolished seven years ago. Moreover, he knows he is accorded little of the respect due him in his firstborn status. While largely resigned to the new status quo, he maintains his dignity by adopting a patronizing air, issuing innumerable slights and disparagements, and claiming dubious rights over territory and property. Occasionally his temper gets the best of him. Ewan pushes too far, and Angus wallops him.

My wife or I enter the crime scene, declare that guilt is shared, and they both get a time out.

In a few days, it is the same thing all over again. We recognize this situation.

Back to the climate debate. I think I recognize some of the same dynamics. Climate scientists have the upper hand right now–their knowledge base is growing ever broader, their understanding of the climate system ever better established, and their certainty about the reality and impact of global warming is increasing. Policies are beginning to be shaped based on their understanding, though they believe it is at least ten years too late. Global elites believe climate science to be increasingly trustworthy (though the general public vacillates in its opinion of global warming science).

Yet, climate scientists are relentlessly irritated by the same tired objections, the same discredited critiques, put forward by what seems like the same twelve people. So they adopt an air of patronizing disdain for their critics, calling them deniers (as in “Holocaust deniers”; although in truth that monicker is used far more by environmentalists than by scientists). This quite rightly infuriates the skeptics, who continue to claim that they’re being oppressed.

Then out come purloined personal emails between climate scientists which seem to say exactly that. Surprise, surprise! Climate scientists are, behind the scenes, real people, with real foibles, who are really, really fed up with attempts to portray their careful life work as a political hoax, or to portray scientists as dim-witted groupthinkers. Their frustration with industry-sponsored smear campaigns spills over into their attitudes toward fellow scientists who adopt the role of gadfly, even though the whole enterprise needs more gadflies.

A little–no, a lot–more respect on both sides would seem to be warranted. If I were in charge, I’d give both the mainstream scientists in question, and their prominent skeptics, a great big time out. Then I’d make them apologize, shake hands, and spend the next hour shoveling Legos from off their bedroom floor.

As a Christian, it is easy to see that the whole arena needs to be more infused with grace. Climate scientists shouldn’t have to feel attacked for trying to build the best understanding they can of how the climate system operates. Those scientists who are skeptical about the mainstream science should be recognized–even lauded–for their important role in asking hard questions. Political operatives who pretend to be more certain than scientists about whether people are or aren’t contributing to climate change need to stop fomenting antagonism.

Moreover, as others have noted, these behind-the-scenes emails reveal that much more transparency is needed in terms of access to original data and the process by which scientific ideas are reviewed and promulgated. Doubtless, to some scientists, turning over their original data to those with little respect for science feels like asking for trouble, like giving your house keys to known vandals. In this contentious environment, however it is worth the risk that some will misuse the data. Similarly, the stolen emails reveal some contempt for editors that let skeptical papers through the peer review process.

But bad papers, with unreplicable results or with fatal flaws, will inevitably slip through the peer review process, which is not a “truth machine” (and some journals will always be more cautious than others). The final arbiter of the quality of a paper is whether it survives AFTER peer review–are other scientists able to replicate and use the results? Does it lead to better questions, and better research? The truth is, skeptical papers do get published, when they consist of good science, but because the current science was built piece-by-piece over a long period of time, it won’t be easily overturned by just a few skeptical papers.

In the meantime, we have to ask whether any harm was actually done, not to the reputation of climate scientists or to their relationships, but to the underlying science itself. Was there anything in any of the emails to cast doubt on the science that says people are, in part, causing the climate to warm? (In fact, as the science journal Nature showed in its commentary, the bluster between scientists about suppressing certain controversial papers didn’t result in any suppression; both papers in question were included and discussed in the IPCC assessment.)

As an exercise for the attentive reader, review the six-step explanation for why CO2 is a problem (from RealClimate–motto: “climate science from climate scientists”), and try to guess which step is undermined by the testy language in the hacked emails.

Hint: it might be that the science is more robust than scientific decorum.

Rusty Pritchard thinks climate change is happening and that people are causing part of it, but his views are his own and not those of his parent organization, Flourish. Flourish believes every Christian should be caring for creation, no matter where they come down on the climate issue. A version of this article appeared in the ESA ePistle this week.

This site uses Akismet to reduce spam. Learn how your comment data is processed.

What are you looking for?